Due to Covid-19, I'm teach 2 classes online, one Thursday afternoons and one Thursday evenings.  Last week, the subject was reflective metals.  Here are the two "brass demos" I did.  Can't wait to see what my students do.

The class is an hour long.  I did the brass and the clementines for the demo.  Later on, after class, I added the orange slice to help balance the painting, and I added the flowers to the other one.  I've got 2 beautiful frames waiting for these two.

I am teaching my 2nd session of online oil painting classes. I have 2 classes that are both on Thursdays.  One is at 2pm and the other at 7 pm.   The first week we worked on rainy day scenes.  I did a demo, explaining how to block in a painting and then proceed to finish it as best I can in an hour.  Afterwards, I send notes to my students so if they have forgotten the steps or what colors to mix, they can follow the notes.  My students have been doing great work and I'm proud them.

These are the two paintings I did for the first class. Rainy day scenes are fun because the wet pavement has all kinds of reflections in it.

Once a year, Baltimore Watercolor Society has an annual juried show.  It's a very prestigious show, and it is hard to get in to it.  I know you are all tired of seeing my Koi Pond painting, but it was selected to be in the annual show of Baltimore. The juror was Linda Daly Baker, a highly acclaimed watercolorist. So to be selected by her is quite an honor.

Due to Covid19, this show will also be online.
www.baltimorewatercolorsociety.org.
The show will be on line from July 1 - Aug 31, 2020.
Posted by Jane McElvany Coonce at 9:47 AM No comments:

I am honored to be a member of Potomac Valley Watercolorists, a juried membership for area watercolorists.  This month I am the featured artist.  If you click on the site, www.potomacvalleywatercolorists.org , you can see what quality of art there is in this group.

As the featured artist, there is a little write up about me as well as 12 paintings that I have done recently in watercolor.

The Potomac Valley Watercolorists were supposed to have a show at Green Springs Park, but due to Covid19, we had to turn it into an online show.  You can also see that show if you go to PVW's website that I listed above.  This is a hard time for artists.  Although I'm producing a lot of art because I'm staying inside, there is not many places open to show art.  My basement is filling up!!!!

So I hope you will go to PVW's website and enjoy an art show and view members' art works.
Posted by Jane McElvany Coonce at 1:34 PM No comments:

The Removal of Appomattox

I was surprised last week when the city of Alexandria suddenly removed the statue called "Appomattox" from the middle of Washington St. and Prince St.
This was a controversial statue for several reasons, one being that it was of a confederate soldier and the other that lots of cars hitting it caused many traffic accidents.  It was in the middle of an intersection and Washington St. is the main thoroughfare through Old Town Alexandria.

I happened to be stuck in traffic one day and was the first one at the stoplight at Prince and Washington.  I took out my cell phone and took photos because I thought this would make a great painting.  I didn't really think about it as a political controversy.  As an artist, I judge statues as how the artist rendered it.  James Muir, the sculptor that produced Appomattox, captured the forlorned look: the body is slumped, the head down, the hat in hand all tell the story of the anguish of defeat. 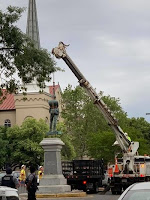 I never thought of this sculpture as a political one. I just loved how the artist captured the mood.  As my artist friend, Sybil Bedner-Ostrowski said, "I loved that statue.  It wasn't about glorifying one side of that particular war or the other.  It was pure art.  A most beautiful rendering of sadness, hopelessness and fatigue.  Human suffering transcends politics."  I know a lot of people won't see it the same way artists do.  I understand why it was controversial, but it still is a beautiful piece of art. 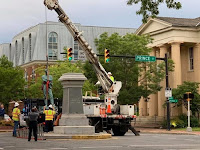 If you haven't noticed by now, I love painting the Key Bridge and Georgetown University in the background.  I LOVE that view.  I don't know why.  Here's the latest painting I have done since this Corona virus has trapped me in my studio.  To be honest, I'm enjoying being in my studio more than normal.  I am painting so much more than when I have to teach my classes and go to meetings.  I've made a list of all the things I want to paint and checking them off as I do them.

This painting, "Georgetown from a Distance" was done from a photo I took as I stood on the little bridge that goes over to Roosevelt Island.  Can't go there now, the park service has it closed off, but I have so many photos I've taken over the years that I have an endless supply.

I've done 7 painting in a month and a half.  Not bad!
Posted by Jane McElvany Coonce at 6:05 PM No comments:

Here's the latest painting I've done since we've been in "shelter in place" for the Corona virus.
Since I'm not teaching my 5 art classes, I have a lot of time to to paint.  The painting is 16 x 20, and I painted it to go in a frame I had sitting in my closet.  I'm trying to access what frames I have in what sizes before I start a painting.  I have closets full of frames.  I need to start using them.


Here's another painting I finished.  I actually did this last year, but it only had one flower in it.  I thought it looked boring, so I pulled it out and add the white flower, the bud and some rose hips.
When this pandemic is over, I am going to have a houseful of paintings, and hopefully, fewer frames in the closets.

Jane McElvany Coonce
Arlington, VA
"The way light falls on an object has always fascinated me. In paintings and in sculpture, I strive to capture the interesting effect that light plays on the subject." Jane McElvany Coonce has been in the art field for over 30 years. She works primarily in oil, pastel, and terra cotta. Her favorite subjects are children, seascapes, and bridge scenes. She is particularly skillful at capturing the luminescent quality of sunlight reflecting on water and on the interplay of water and sky. Her works are held by private and corporate collectors. Her corporate collectors include the National Institute of Health in Bethesda, Maryland and the International Country Club, Fairfax, Virginia and the Rickover Academy in Chicago. She has won numerous awards for both her paintings and her sculptures. She has been an art instructor for Arlington County Adult Education since 1980.